Phew, been a while since I posted anything on here! D:
(Also, I just realised that I have a few lovely comments I never answered to :( sorrryyyyyyyyyyy! ;____;)

Anyway, this is a bit *too* long to be posted on Tumblr, so I guess here is the best place to post it ^_^ This is a tutorial on how to convert default female hair meshes to male in TS4. Hope you will find it useful! :) Hopefully, we're going to get a tool like TSRW for TS4 like we used to have for TS3, so probably this whole process is gonna become pretty much useless in the future, but in the meantime, if you want to experiment with ftm conversions... here's a guide! ^_^

NOTE: This tutorial is now outdated. The process *still* works, but there's a much easier and faster way to make gender conversions, which soloriya described here :) You may want to check that one out instead! ^____^

(Also, a super late thank you for the comments on the tutorial! <3) 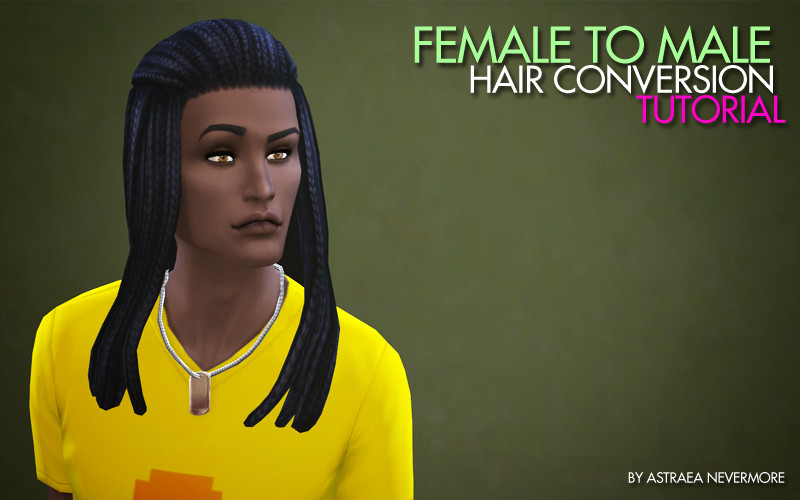 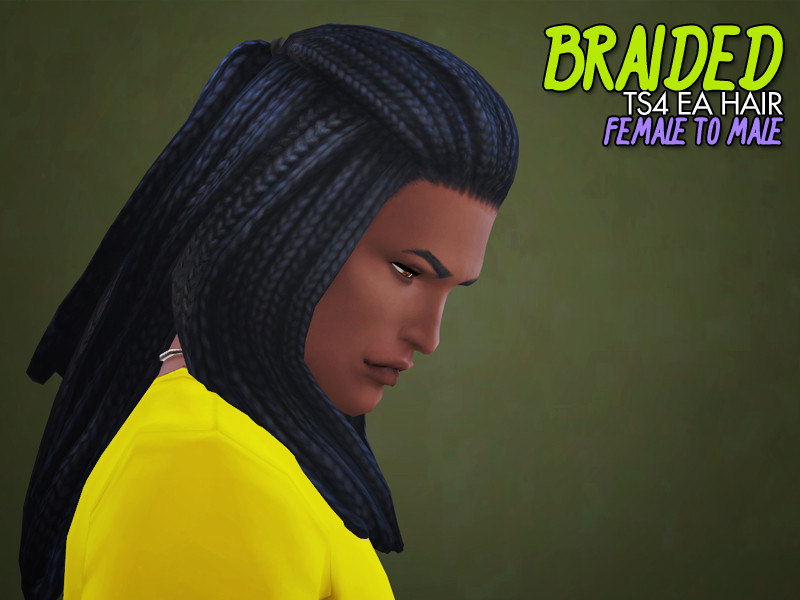 IMPORTANT NOTE: This hair features some mesh editing, together with the conversion process explained above. Following the process explained in the tutorial, as long as you do *not* edit the mesh, shouldn't give you any crashing issues. Mesh editing in TS4, however, is still a very experimental thing in TS4, and errors may occur. I received some reports from people having crashing issues with this hair. According to this thread, crashes with cc hair and accessories mostly occur on Windows 8.1 and/or with Intel graphics card, though that’s not always the case. The reason for hair crashing is still unclear, and creators are still working to find out what the actual issue is. If you never had troubles installing CC hair before, you *shouldn’t* have any trouble installing this. For anyone else… please, be careful and know that this may crash your game D: If you try the hair and it crashes your game, please send me a message and be as clear as possible about the issues you’re having. Infos on your OS, video card and other installed CCs could help too. Keep always in mind that the game has been out for only one month, and that we're all still learning how to do this :( thank you for understanding ;___;

Hope the tutorial was clear, if you have any questions, feel free to ask. Happy simming! :D

Back again after ages! Apparently, looks like my "shiny new computer" doesn't want to let me use the Photoshop .dds plug-ins, so that my career as clothing/tattoo maker for TS3 is basically finished until I learn how to use some other software to handle that kind of file. Something that is taking me more time than I'd like, lol.
At least... I can still work on sims :D So, here we go: here's something I started working on *ages* ago (sounds new, heh?). I'm not sure it's 100% perfect, to be honest, but I got quite a few requests for him on Tumblr, so I guess I'd finally go and upload him.
Ladies and gentleman... Peter Steele sim up for download!
With my best wishes for a merry Christmas, also :)

I’m having some connection problems, lately, which is why I kinda disappeared from the net D:
Taking advance of one of the few moments I can use to stay connected, then! 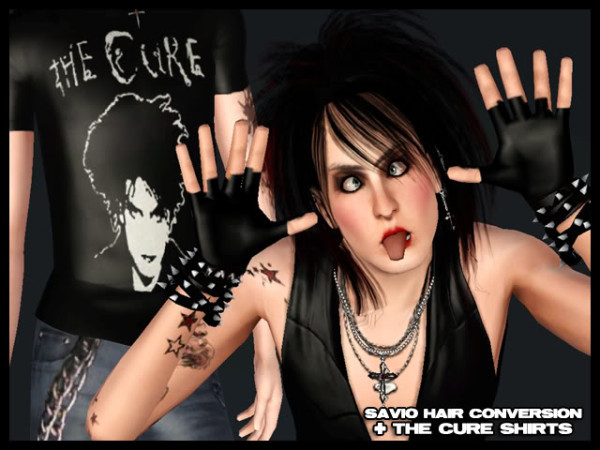 After seeing a few female hairs enabled for males on MTS, I decided to try the same. As you may have guessed, I have a *huge* thing for long haired sim guys, and in countless occasions I found myself drooling over some female hair meshes I thought would have looked just perfect on males! Point is, at the time I didn't know that some of these meshes could be simply converted using CTU. The one I'm presenting here is one of these :D

The hair works from teens to elders, and uses Anubis' retexture/fixed mesh... which I guess you'll need to download from here (EA's highlights version).  I don't really know if it works without Anubis' file, in case it does... let me know! :D
The polycount is the same as the original hair (copy-pasting from Anubis' blog: around 10000+ polys for HQ and 5900+ polys for LQ).
The hair looks pretty nice with the majority of body shapes, save for some minor clipping on bigger body shapes.
That said... hope you'll like it, anyway :D have fun ^^
DOWNLOAD

Something I've been wanting in my game for ages. The conversion was actually pretty damn easy to make, but hey, throwing it here in case someone needs it :D

The warpaint is categorized as "costume make up", so that you can basically wear it with any other kind of make up, be it eyeliner, lipstick or blush. Blush tends to partially overlap the warpaint, but using the opacity tool makes it less noticeable. One recolourable channel, works for teens to elders, both males and females. I completely forgot to enable it for kids, sorry D: if you need, feel free to ask for a kids version, too... or to make your own! :)

As it often happens with make up, it will look slightly different depending on the face sculpt of the sim. Very low cheekbones mean a very low warpaint design, puffy cheeks will make it "curve" in some particular ways and so on.
Use and abuse at your own will, feel free to modify as you wish and, most important... have fun! :D
DOWNLOAD

And after a looooooooong absence... here I am again!
This time there was a request on GoS for a Marilyn Manson sim and, since I had already started to work on him a few months ago, I decided to take it. So, here we go! :D 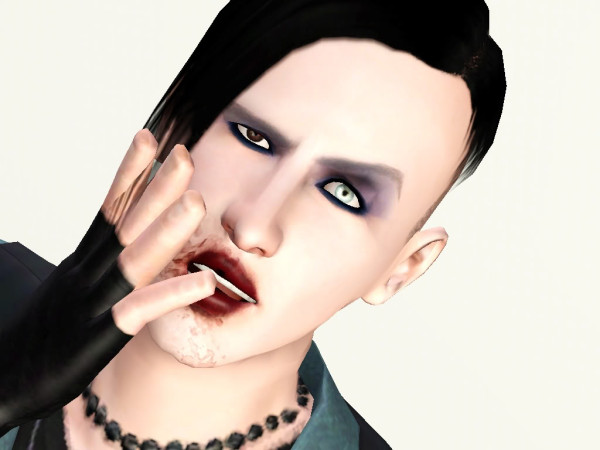 Yay, an upload for TS2, at last! Peggy did these really nice hair lately, but the original textures bothered me to death, so I decided to make a Pooklet'd version of them... I also altered a bit the colours of her original textures, so I guess this could be a retexture/recolour sort of work °° anyway, credit goes to Peggy for the meshes, Pooklet for the textures and... huh, me for the recolours? °° 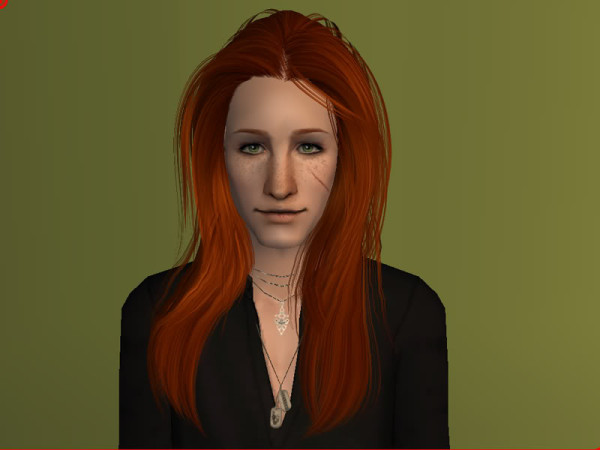 Yep, back again after a loooooooooong time! I finally managed to install TSR Workshop and I decided it's time to come back to creating some random stuff. While I have  a couple of more serious projects I'm working on, here are two simple edits I did to a couple of Sims 3 clothes. It's nothing complicated, really... basically, all I did was just ticking some boxes XD however, I thought that maybe someone could still find this stuff useful :D The first one is an edit of the "adult male loose shirt" that came out with Late Night EP: I always loved the mesh, but I'm not a fan of the horrible design with the muscles, which prevented me from using it on any of my sims. I know that tamo already did a default replacement recolour of this very same mesh, but I wanted a non-default version as well. Sooo... here it is :D 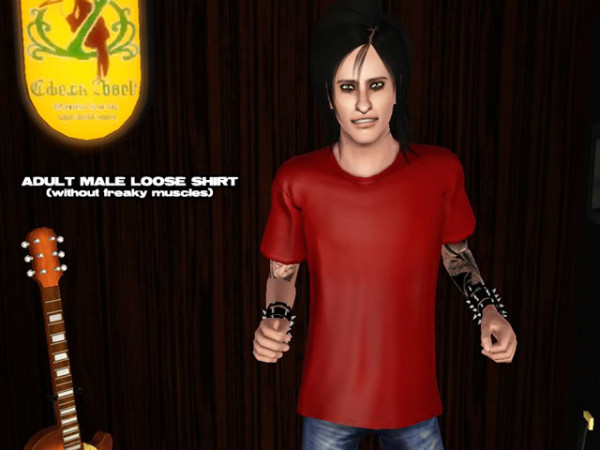 Comes with white, black and green as default colours, but you can recolour it as you wish. The file is in sims3.pack format, I may add a .package version if needed =) categories and ages are the same as the default shirt. 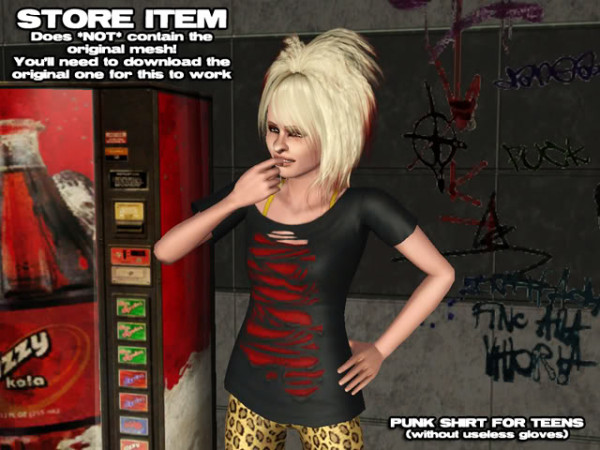 This is another very simple edit... a while ago, Aikea Guinea removed the gloves from the Store "af punk ripped t-shirt", but her version was only for adults and young adults. The thing I did here was simply enabling the textures so that they could work for teens (it took less than five seconds, really XD).  The file does not replace the original one or Aikea's edit, and the Store mesh is not included in the .package. You'll have to download the shirt from the Store in order to have this working!

Hi everyone! Been a while since I posted something on here... here I am again, though XD Just wanted to wish everyone a merry Christmas and happy holidays! I also have a new sim for you!  ...Well, not so new, maybe XD I made her a few weeks ago, she was the second sim for GoS' december challenge, but haven't had the time to post her 'till now. So... here she is :D

Lucius was created for a sim challenge on Garden Of Shadows: the prompts he's based on are 'mephistophelean' and 'eros'.
Preview pics, story, CC list and download link under the cut! :D